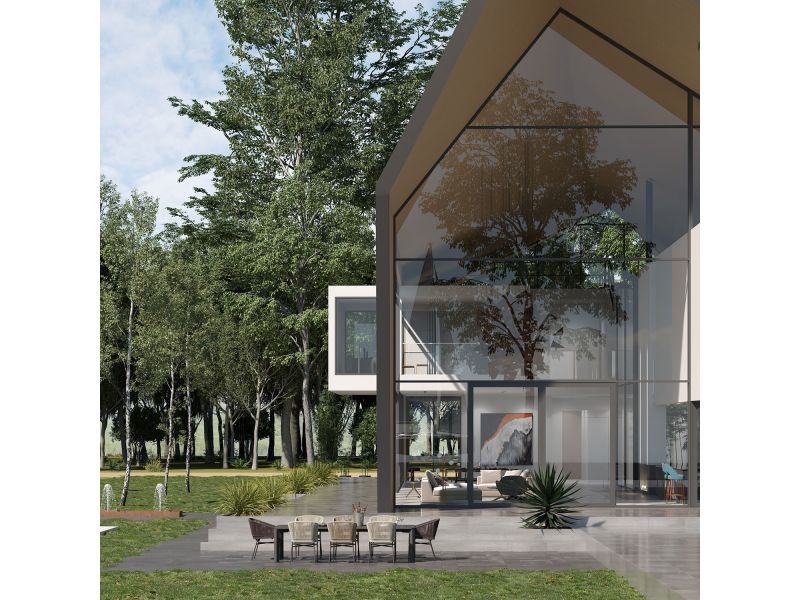 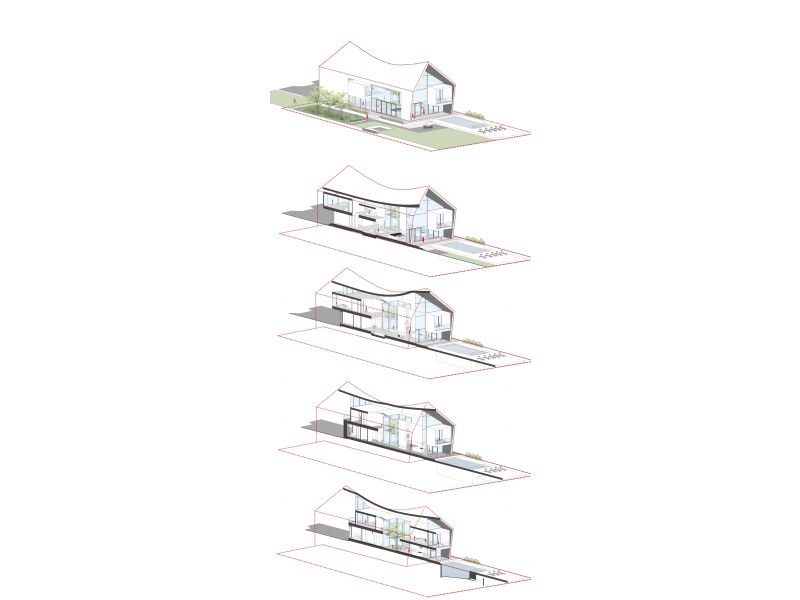 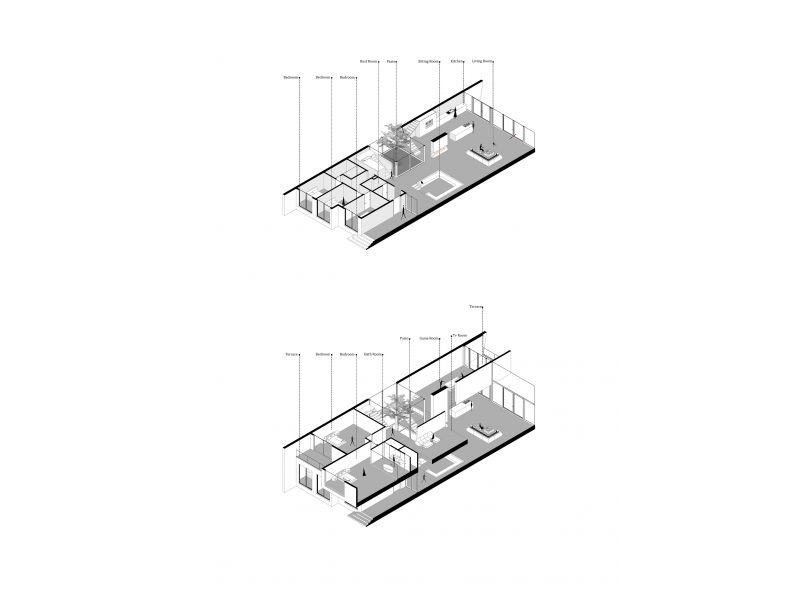 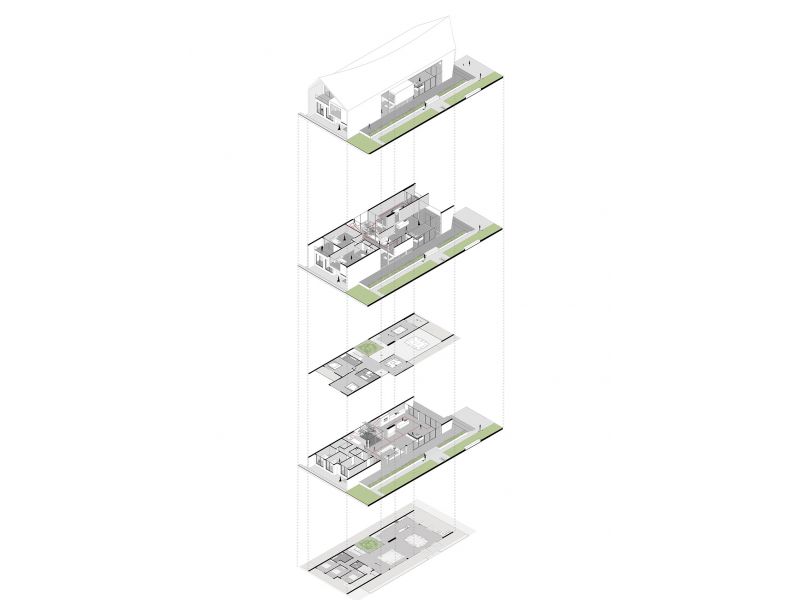 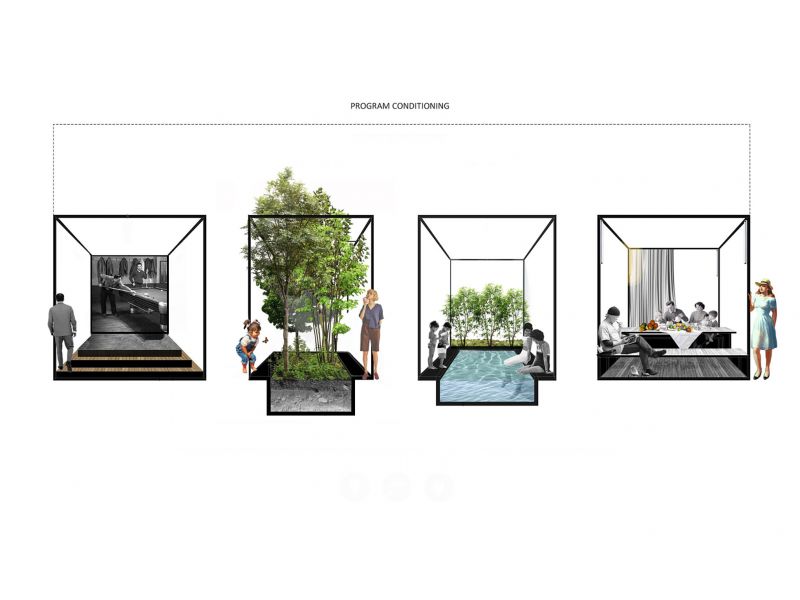 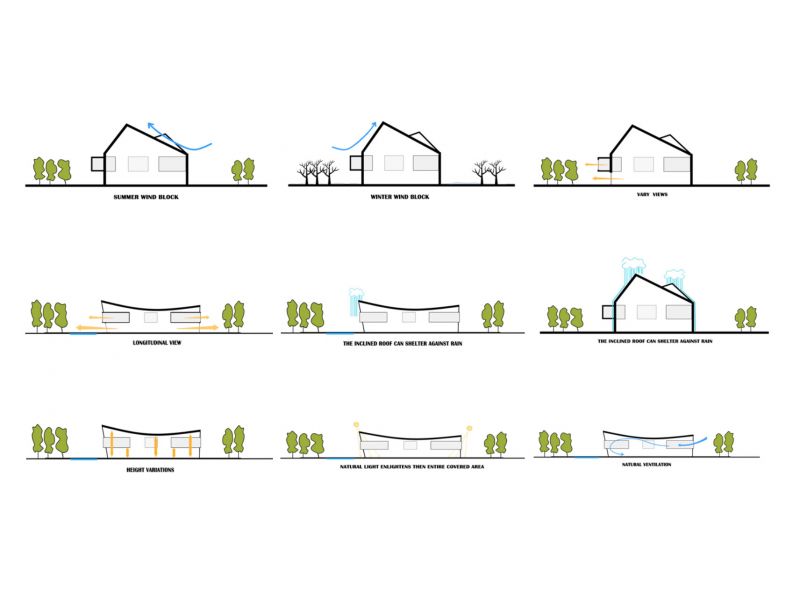 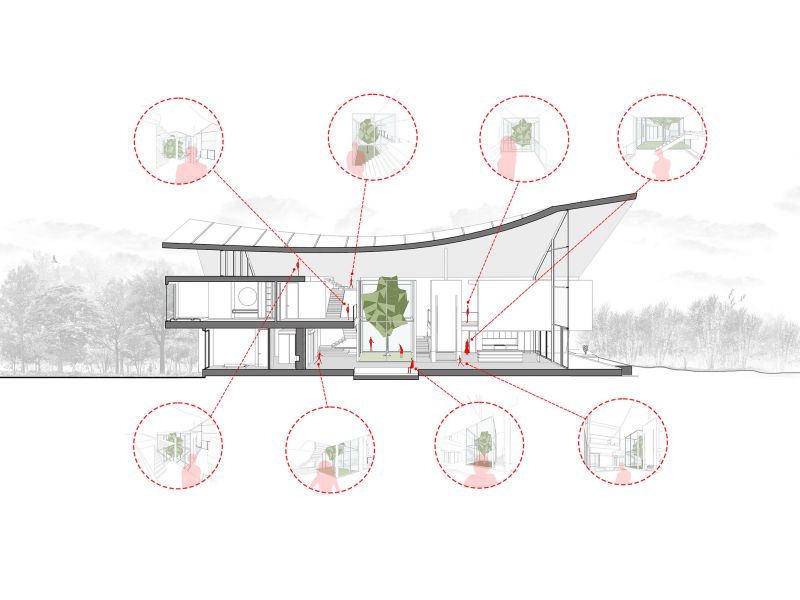 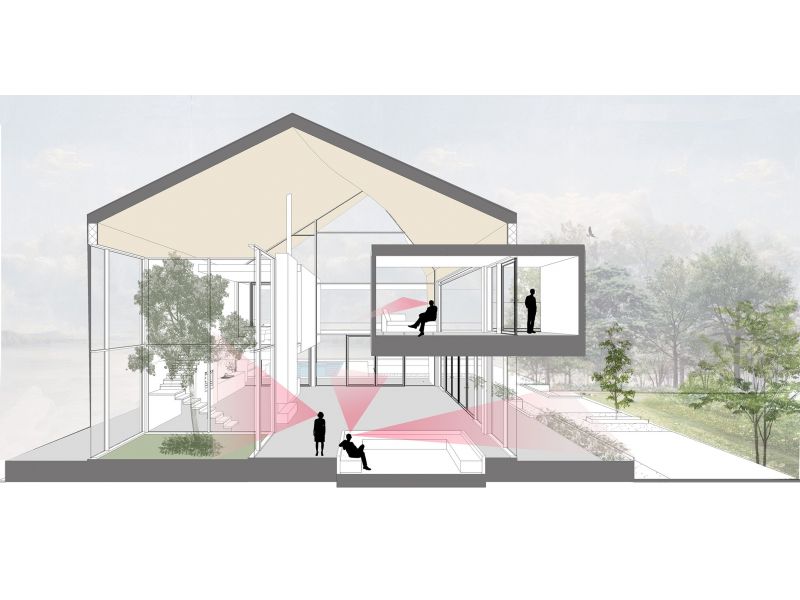 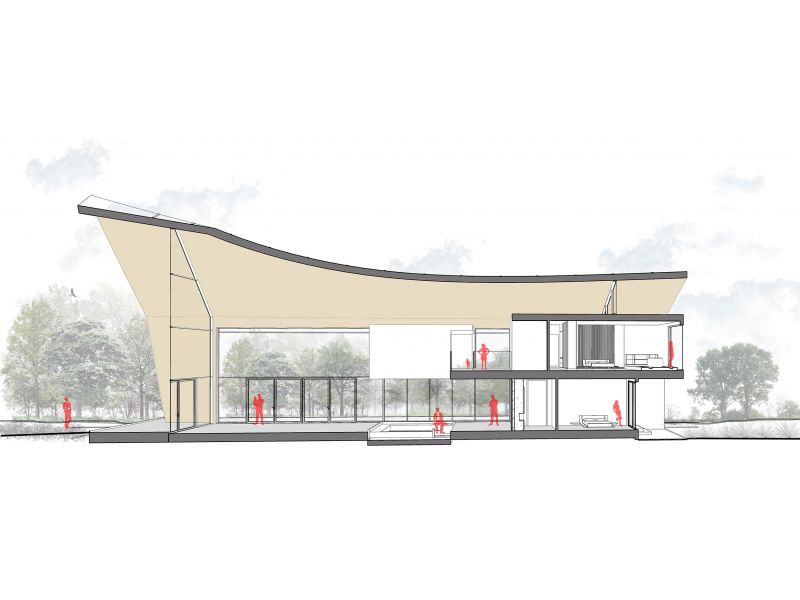 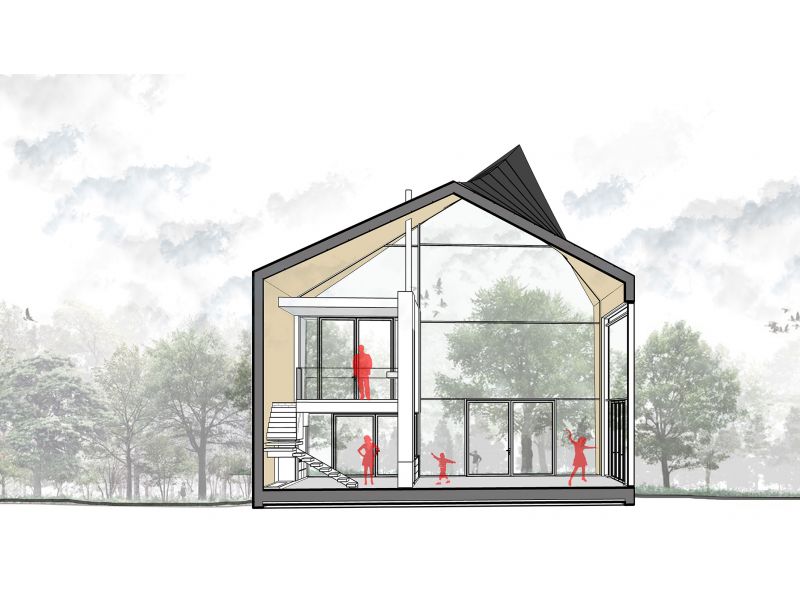 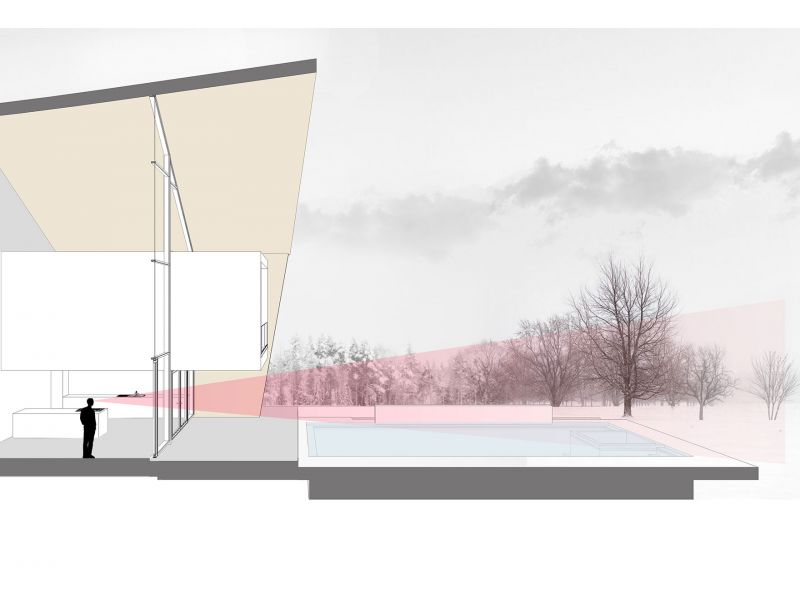 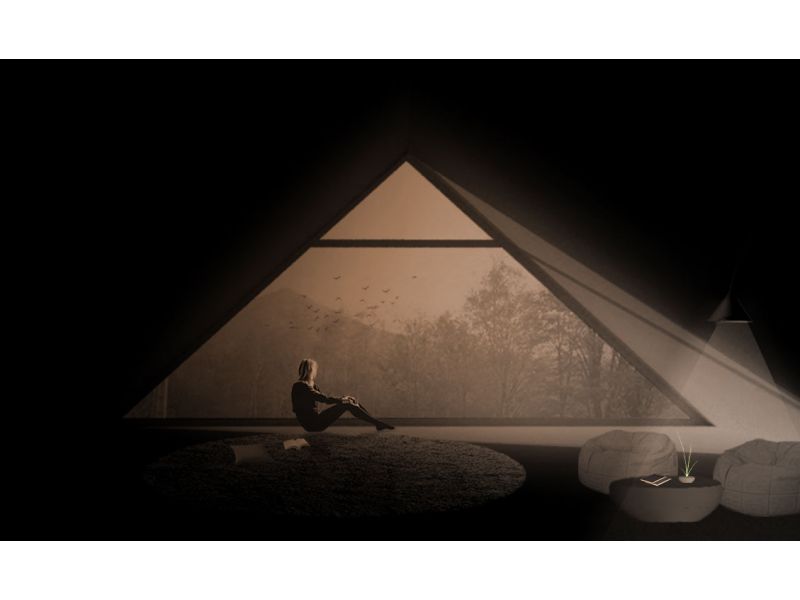 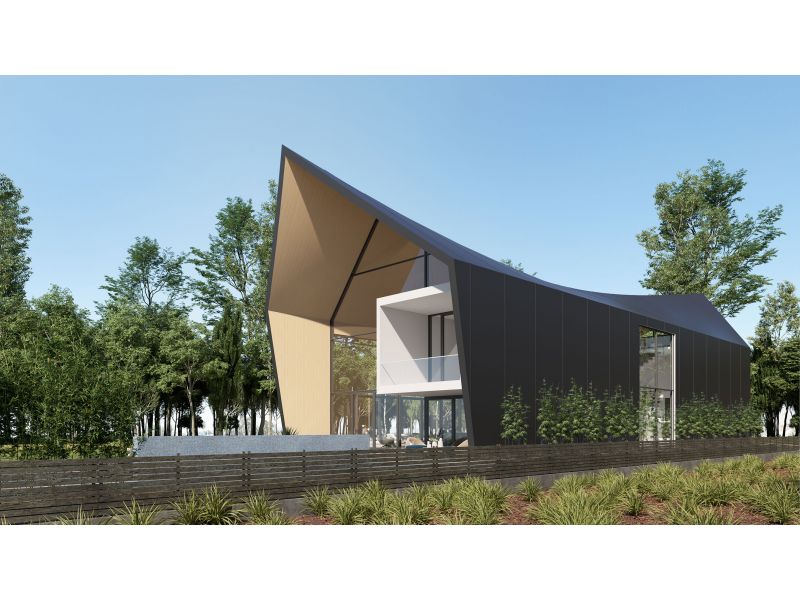 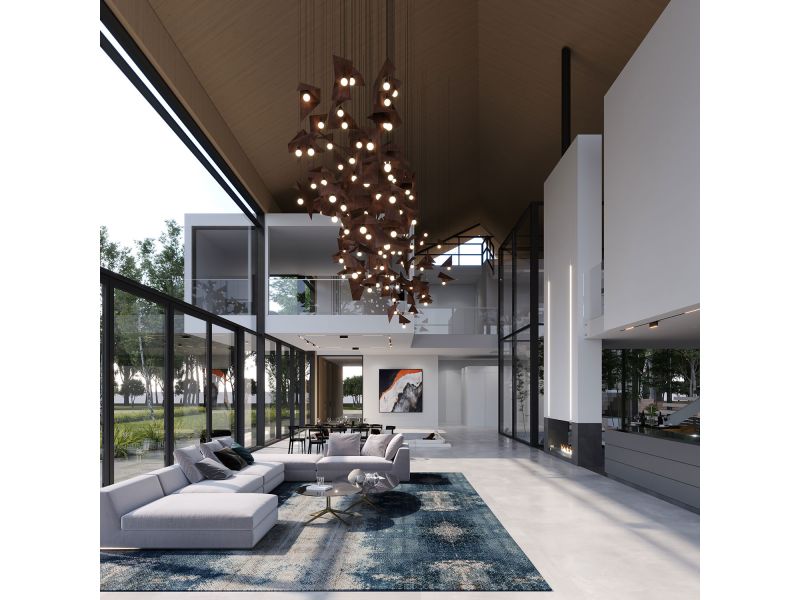 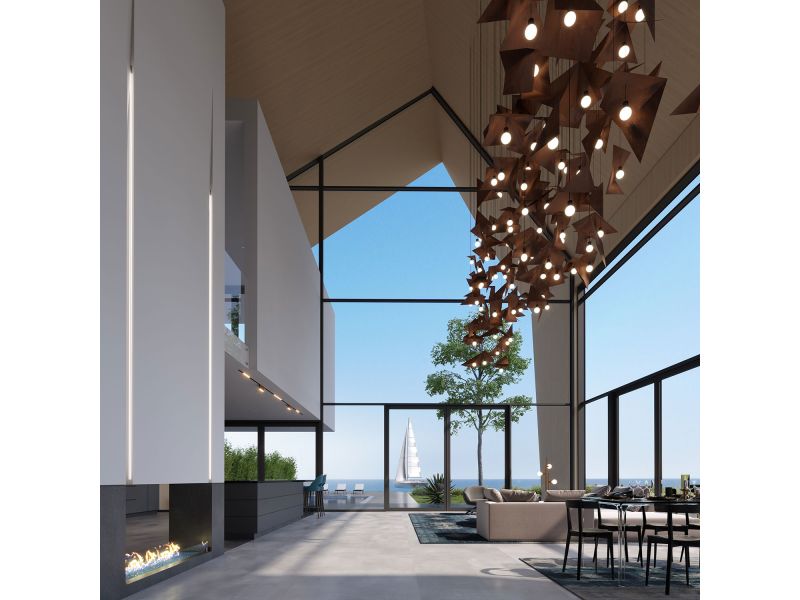 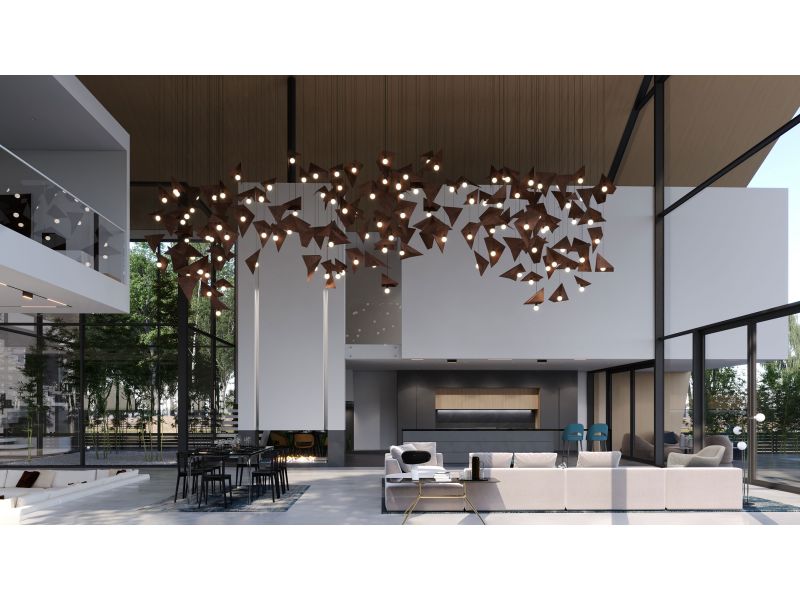 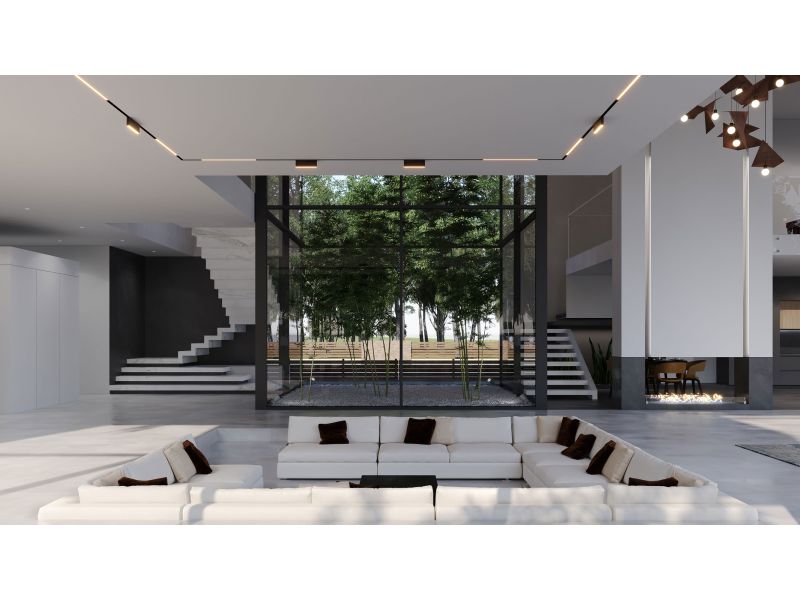 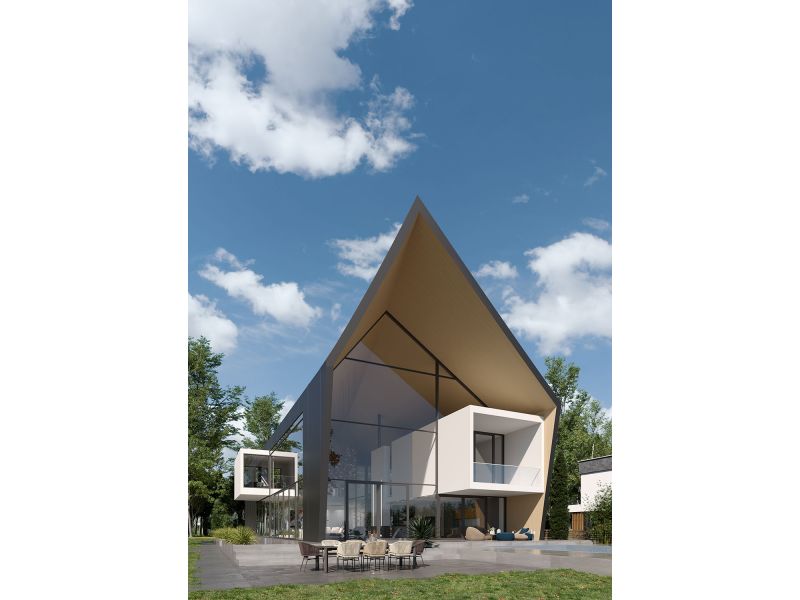 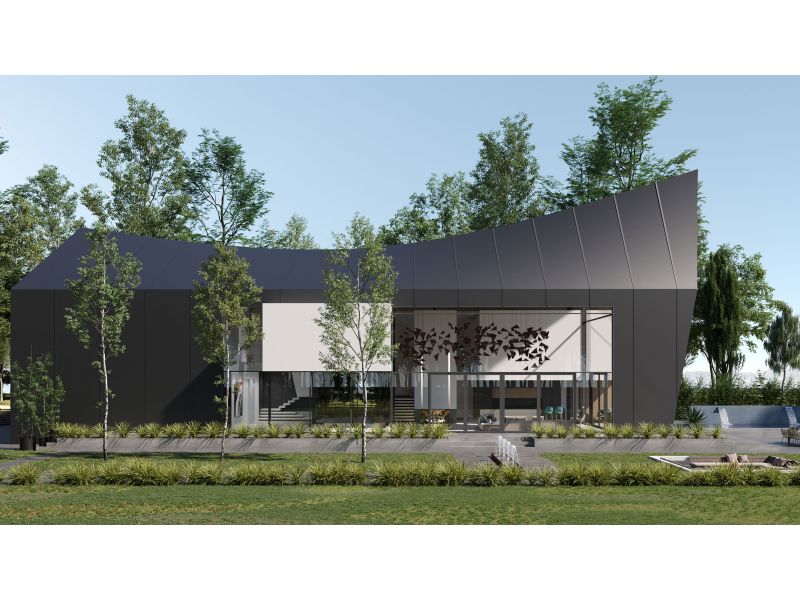 A building designed to adapt to climatic conditions and exchange energy. Creates an interactive dialogue from residential veils and environment: seasons and what nature watches over time, and there is no mask between inside and outside, and despite the transparency, it answers the problem of privacy. In addition to the outdoor space and nature around the building, the user also can feel that inside. And while solving energy concerns, discovery and intuition add to the quality of the space.

A building that tries to frame the surroundings with large insulated windows in a neat way and its inhabitants communicate well with nature, and this improves light and heat control, and a large amount of ventilation is controlled and performed naturally. The arrangement of cubic volumes inside the outer volume so that they differ in height creates diversity in the space organization; At the same time, these boxes preserve the privacy and independence of its inhabitants, and it is possible to be inside or on them, and by placing the space of family activities and services in the open middle space, it focuses on human sociality.

The building expands from east to west due to the climatic conditions of the region, and the elongated form and chimney of the outer shell are due to better air circulation. This twisting of the roof also prevents air twists. The design of the building is transparent and layered. Sloping outer covering that covers the interior space and interior spaces that are suspended in separate boxes around the hallway and living space. Efforts have been made to create empty spaces at the common border between inside and outside the building; intermediate space to create visual boundaries, the play of light and shadow in the interior.

Designing a building with contemporary architecture while responding to traditional and climate issues and energy sustainability and at the same time making the most of the surrounding landscape has been one of the most important challenges of the work. Having simultaneous response for fresh air and optimizing energy consumption, transparency and privacy, creating spaces for social interactions and personal space, interacting with nature with a Biophilic approach, and shaping the form according to the prevailing winds of the mountains and the Caspian Sea the most important challenges that answered in this design.

The traditional architecture of the region is extroverted; Nature embraces architecture and due to the beautiful scenery around and the beach in front of the site, the main idea of the building was formed with suspended spaces with maximum view and transparency; Suspended spaces can help maximize the view and excitement of the space. The outer shell is inspired by the traditional roofs of the area, which, like them, are built on the main spaces. With its wide openings, we can watch nature.

Building design optimized with energy modeling software; the building expands from east to west due to the climatic conditions of the region, and the elongated form and chimney of the outer shell are due to better air circulation. This twisting of the roof also prevents air twists.

The main studies on the climate and indigenous architecture of the region have been done in a library and field, and along with it, the ways that have the best results in terms of sustainability and optimization of energy consumption have been studied. The final result was the sum of studies with statistical data and output graphs of energy software.

This region has a temperate climate and is influenced by the Caspian Sea and the Alborz Mountains and has a lot of rainfall. As a result, natural ventilation and rain control are one of the most important issues in this climate.

The outer shell is inspired by the traditional roofs of the area, which, like them, are built on the main spaces. with its wide openings, we can watch nature, on the other hand with this idea we have space with maximum ventilation and fresh air.

Winner in Architecture, Building and Structure Design from A’ Design Award/ Italy

Keivani Architects is an award-winning Iranian international studio, was established in 2009 by two architect brothers Nima Keivani and Sina Keivani. The projects done by this studio are in different architectural spheres, including residential and commercial buildings, as well as the restoration of ancient monuments. Keivani Architects has already designed and implemented many architectural and interior design projects in the Middle East and Europe. In addition, their projects also were exhibited in architecture and design exhibitions such as the Design Museum of Como in Italy 2020, and modern & contemporary architecture of Iran in Tokyo contemporary museum May 2018, and GAP 2017 Melbourne University School of design and etc. they have won several prestigious international architectural awards and have invited to be a jury participant in international architecture awards, Their articles and architecture works have been published in many world-leading and famous journals and publications.

Keivani Architects’ practice has been concentrating on spiritual dimension of architecture, in which the creation of meaningful, enriched, and innovative spaces is remarked as a significant task. Relying on their theoretical and practical experiences, the design team utilizes up-to-dated methods and technologies to actualize the generated ideas, in which social, environmental and economic sustainability is in the core. Their creativity and ideas are usually influenced by regional culture and environmental circumstances, which in a global scale, make their practice novel, unique, and useful for human society.