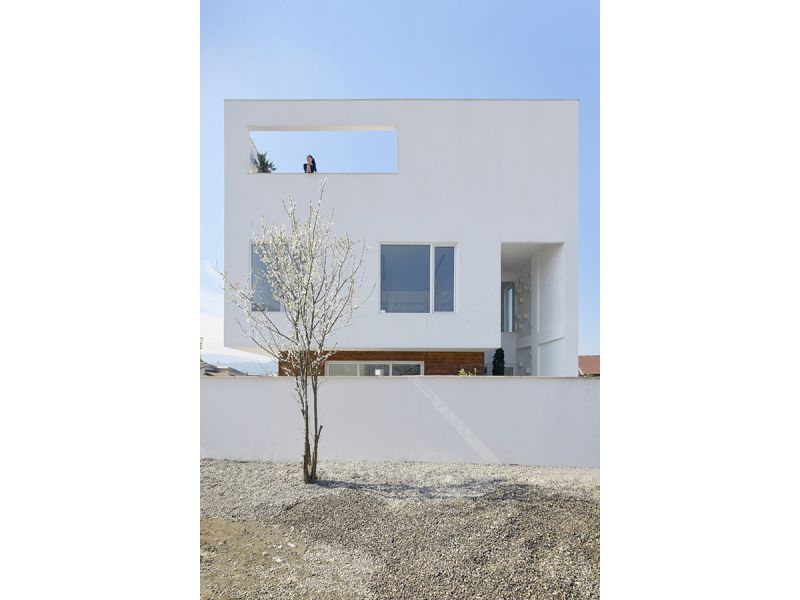 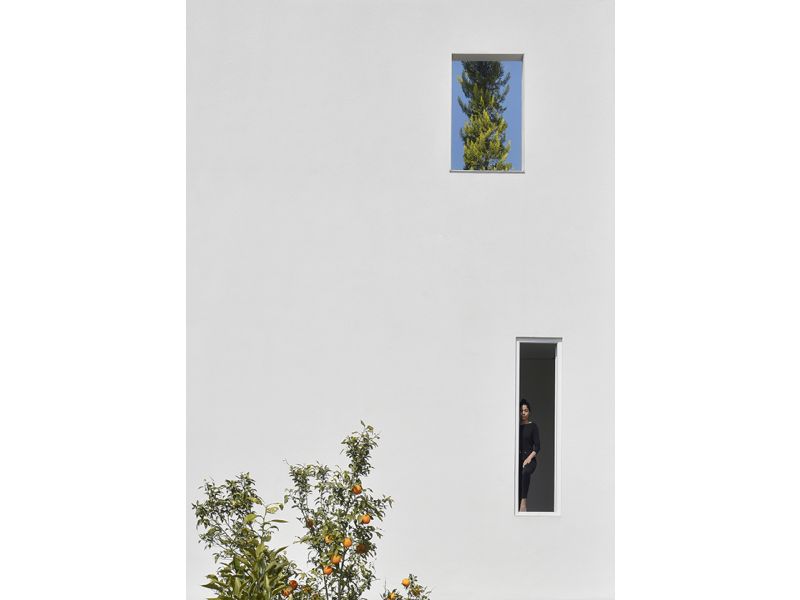 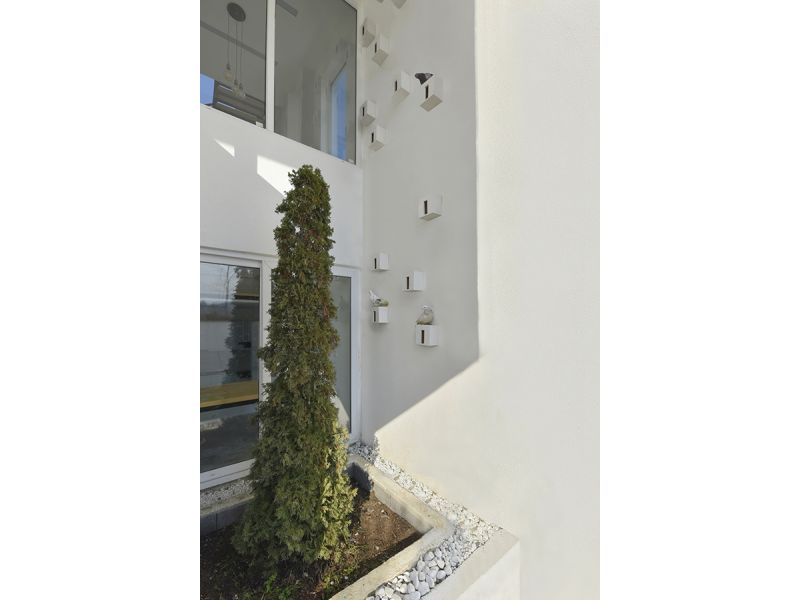 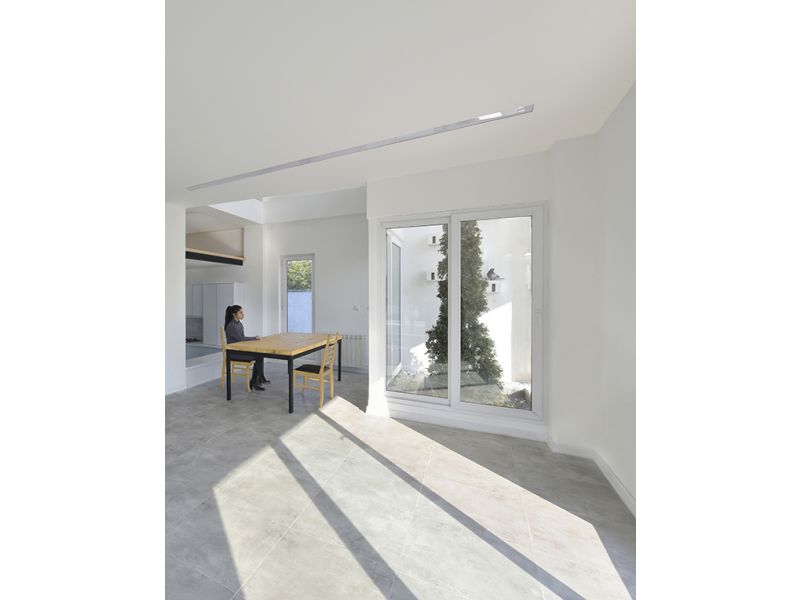 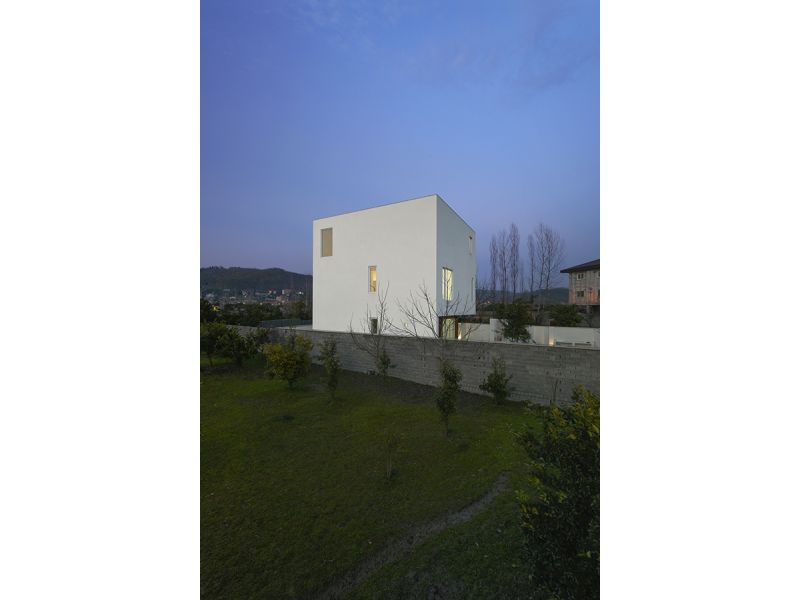 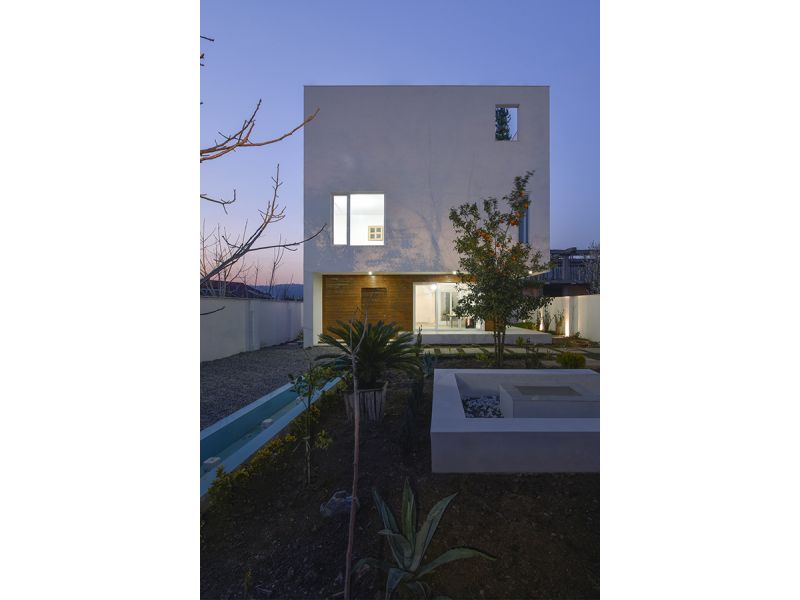 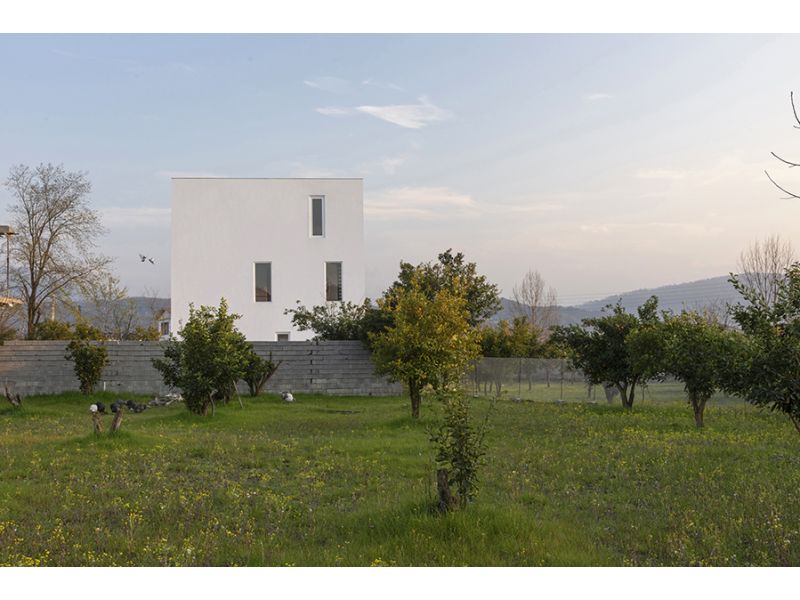 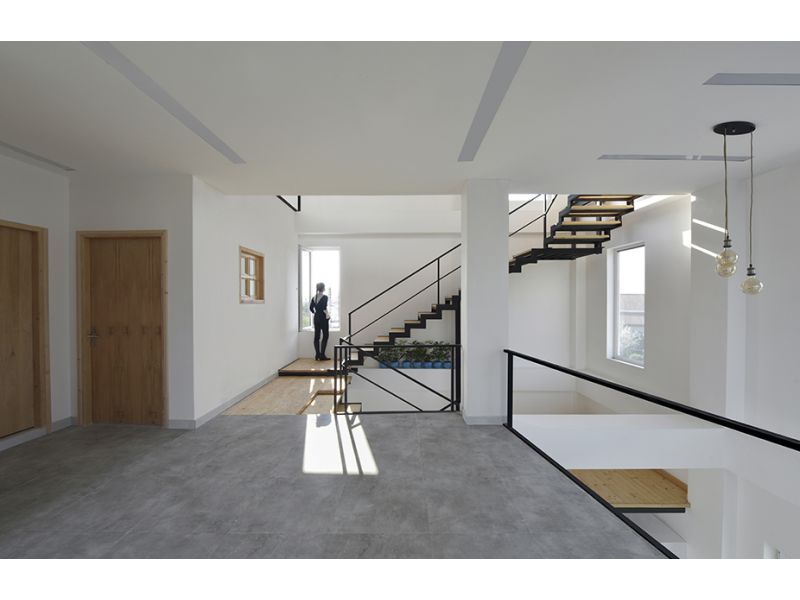 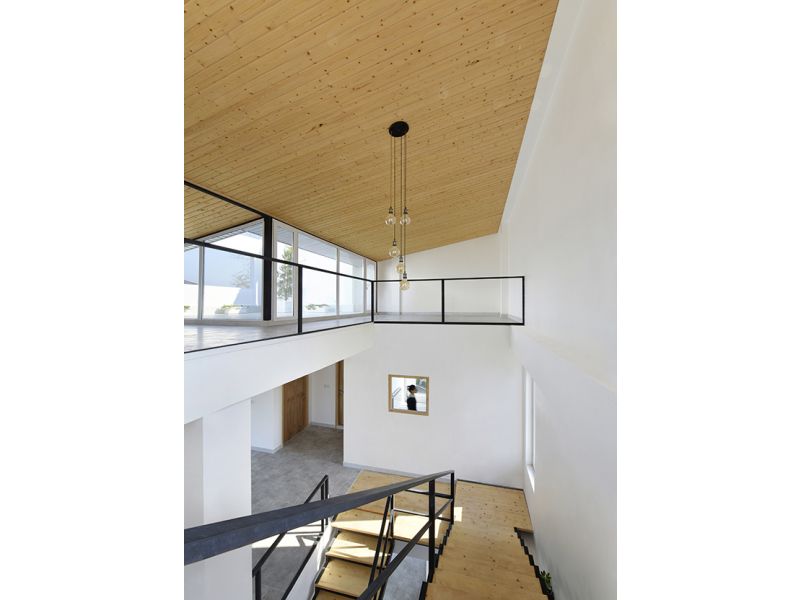 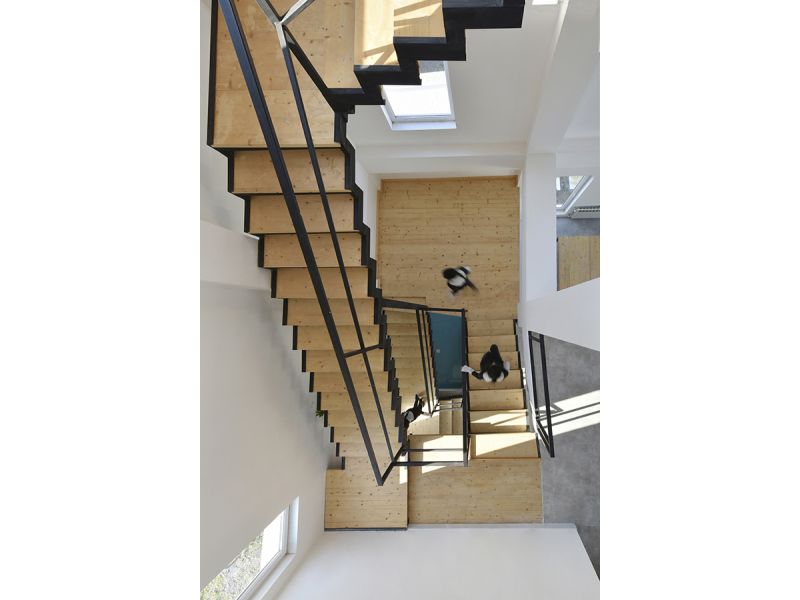 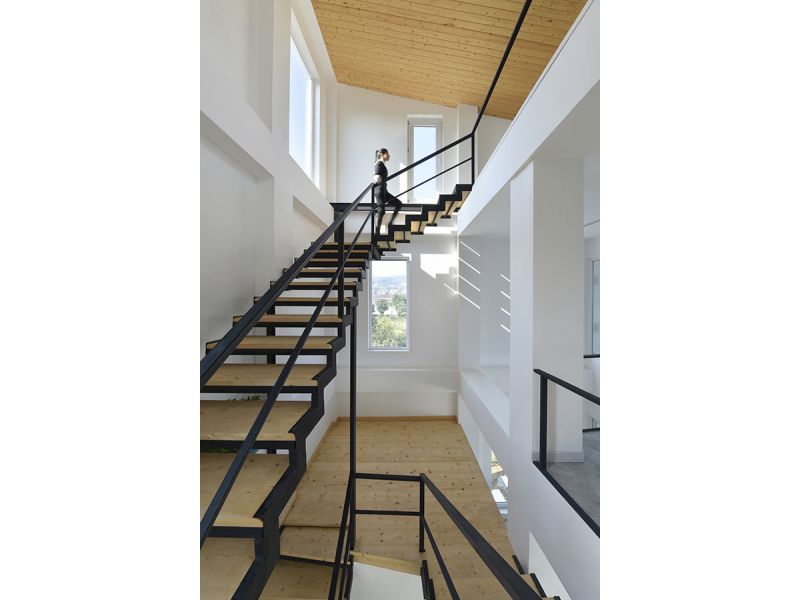 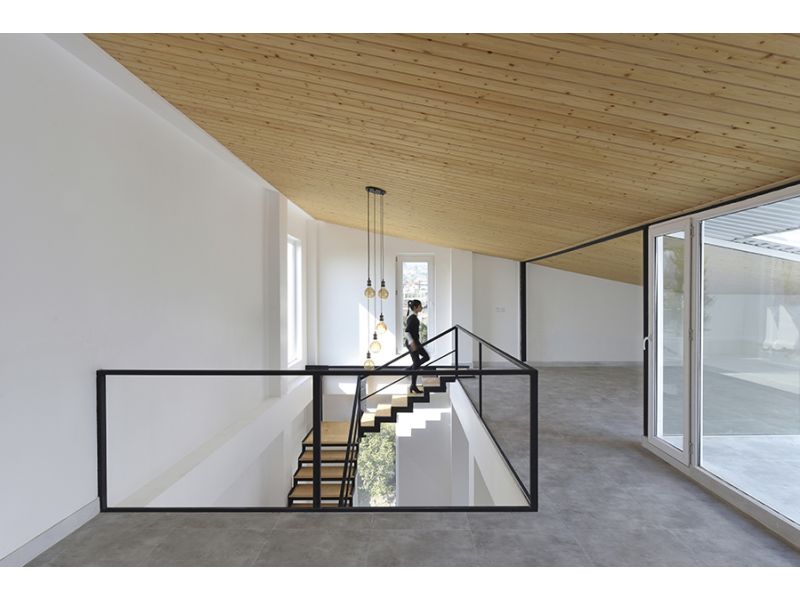 As the project name suggests, the basic concept behind the design was to create a space for co-existence between humans and birds. After visiting the project site before the design, the architecture team noticed the widespread presence of birds there. Thus, to respect their rights, they decided to design a house where people could live next to them to create an interaction between them that causes a different sense of space to improve its quality. In this respect, inspired by Iranian historical dovecotes, a part of interior space was dedicated for this purpose that acts as a patio due to the use of glass material and the transparency around it. As a result, the design of the work was practically expanded from the inside out. The interiors were shaped by the creation of the section game and the surface difference in the spaces as well as the specific design of the stairs and voids inside it. Even the windows of the building were arranged according to the interior section game. Thus, in addition to creating different sequences of view and the outside perspective, we will see the light radiating from different angles, and consequently playing the dance of light with a change in the angle of incidence.

Moreover, this type of window layout design at different angles creates a draught inside that is consistent with the climate of the area. The staircase box is designed in such a way to be different in each floor, and as the centerpiece of vertical circulation, it has evolved into an exciting space that invites you to explore the spaces. Due to the importance of this space, even a window opens to the staircase from one of the bedrooms so that the user can see the stairway section game in addition to the view from the room window on the facade. Besides, in front of this small window, there is a larger window facing the outside of the staircase that allows one to view the tree from the other side of the courtyard. Furthermore, in the outer volume, architects have used the purest type of volume as a minimal cube to minimize the impact on their surroundings. Therefore, they opted for the minimalism of the work and the consistency of the white scheme concept. At the same time, due to heavy rainfall, the native and climatic architecture of the area necessitated the use of sloping roofs by architects. Therefore, to maintain the purity of the volume, a green sloping roof is installed hidden behind the walls to respond to this problem as well as to create a different green roof space that has become one of the most enjoyable spaces in the project.

All in all, the interiors and building roof are designed to allow the user to have their backyard in the surroundings, while also inviting you to interact. On the other hand, due to shortage of funds and being located in one of the villages in northern Iran, the design team was forced to use the cheapest materials and native artisans to execute the project. The total budget for the project was about 2.5 billion Rials (about $21,740).

Due to the lack of budget and according to the design thinking line in order to respect nature, cheap and sometimes recycled materials were used in the construction of the building. All the wood used in the construction of the building, such as the facade and sloping roof, stairs, doors and windows, are made of old wood recycled from the old buildings of the place, which was cut and sanded by the construction team. The rocks used in landscaping are sedimentary rocks in the village that were collected and used in the site. A form of sloping roof was used in this building that had not been used before. In fact, the sloping roof are hidden behind the walls to maintain the cubic and minimalist form of the building. And rainwater is collected on the roof surface by drainage and utility pipes. And is used for irrigation of site plants

Perhaps what sets this building apart is its new look at biophilic architecture, Architects have always paid attention to the use of plants and light and water. But this house has become a place for more interaction; birds. This is a house for humans and birds. In this respect, inspired by Iranian historical dovecotes, a part of interior space was dedicated for this purpose.The interior spaces is formed around the patio where the birds live, by creating cross-sectional play and level differences in the spaces, as well as the special design of the stairs and the holes inside it.

Keivani Architects is an award-winning Iranian international studio, was established in 2009 by two architect brothers Nima Keivani and Sina Keivani. The projects done by this studio are in different architectural spheres, including residential and commercial buildings, as well as the restoration of ancient monuments. Keivani Architects has already designed and implemented many architectural and interior design projects in the Middle East and Europe. In addition, their projects also were exhibited in architecture and design exhibitions such as the Design Museum of Como in Italy 2020, and modern & contemporary architecture of Iran in Tokyo contemporary museum May 2018, and GAP 2017 Melbourne University School of design and etc. they have won several prestigious international architectural awards and have invited to be a jury participant in international architecture awards, Their articles and architecture works have been published in many world-leading and famous journals and publications.

Keivani Architects’ practice has been concentrating on spiritual dimension of architecture, in which the creation of meaningful, enriched, and innovative spaces is remarked as a significant task. Relying on their theoretical and practical experiences, the design team utilizes up-to-dated methods and technologies to actualize the generated ideas, in which social, environmental and economic sustainability is in the core. Their creativity and ideas are usually influenced by regional culture and environmental circumstances, which in a global scale, make their practice novel, unique, and useful for human society.