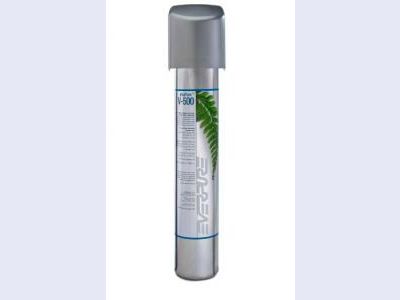 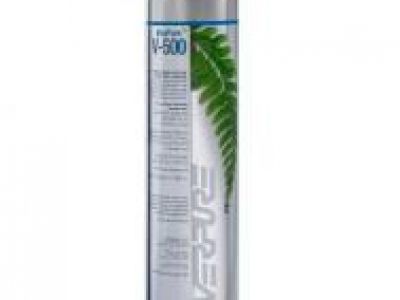 Previous Next
Everpure LLC is proud to now offer designers, architects and consumers a world's first in water filtration with the new, award-winning ViruPureâ„¢ commercial grade system which filters even the smallest possible viruses from drinking water. The new product also blocks a host of other impurities that affect water's healthfulness, taste and aroma with a single filter unit that mounts conveniently under virtually any countertop. The single-canister ViruPure offers a generous 500-gallon capacity of filtration, which will typically last a family of four one year. The cutting-edge product removes more than 99 percent of viruses, bacteria and cysts and also reduces VOCs, THMs, MTBEs, chlorine, chloramines and lead. The ViruPure system by Everpure yields truly flawless water, free from chemicals and impurities, enhancing everything from coffee to all recipes. The single-canister ViruPure system offers enough water filtration to last a family of four more than a year.

The ViruPureâ„¢ system is developed from recyclable, aluminum content.

Sometimes, one person's vision can change the course of industry, which is certainly the case with EVERPURE, LLC, a division of Pentair. The original technical breakthrough conceived by its founder in the 1930's created an entirely new product categoryâ€”that is still being used in EVERPURE products today. From its humble origins to its global presence today, the history of EVERPURE is a story worth telling. In 1933, C.B. Oliver founded a water treatment company in Chicago, Illinois, based upon his belief that every home should possess the ability to filter its own superior drinking waterâ€”starting with his own. (Oliver's vision predated the EPA, and the Safe Drinking Water Act, by nearly forty years.) The company was called Tested Appliances. The breakthrough technology was called precoat filtration technology, an entirely new method of extracting impurities from water. This technology formed the basis of the company's first filtration system, and can still be found in EVERPURE products today. Throughout the 1940s and 1950s, the company witnessed considerable growth of both its facilities and its salesâ€”including its initial contract to produce water filters for the nascent automatic beverage vending industry, which remains a part of EVERPURE business today. By 1957, the company was officially re-named EVERPURE, and the company's continuing growth mirrored that of the industries whose point-of-use water filtration needs were also growing. This included the explosion of the fast-food industry throughout the 1960's and 1970's. By the 1990's, the EVERPURE name was ubiquitous; EVERPURE's customers include Coca-Cola, Walt Disney World, the U.S. Navy, and even Air Force One. In addition, EVERPURE is the number-one choice of restaurants throughout the United States. The company's success attracted a number of different corporate parents over the years. In 2003, EVERPURE was acquired by its current owner, Pentair, Inc. (NYSE: PNR), a company whose dedication to EVERPURE success is clearly evident in the newest, and most exciting chapter of the company's history. The most visibleâ€”and excitingâ€”result Pentair's acquisition is EVERPURE's rededication to the consumer market, specifically, to the high-end homeowner who demands clean, filtered, â€œluxurious waterâ€ for the entire home. To serve this upscale market, EVERPURE has broadened and deepened its product line, including products for both below and above the countertop. Not only does EVERPURE offer a wide range of undercounter filtration systems (which can filter out impurities as minuscule as 0.5 microns in size), but now, the company also offers a line of designer faucets, bathroom drinking stations, and even commercial grade water chillers and heaters for instant cold and hot beverages, respectively. The company's products transcend the kitchen, encompassing the bath, wet bar, prep sink, and even the latest trend toward the outdoor kitchen. Today, EVERPURE is proud to serve a number of industries, including foodservice, marine, and aviation. But, perhaps ironically, the company's greatest future growth may well mirror its humble past, in filtering water for the home. For more information about any of EVERPURE's products, contact EVERPURE at (800) 323-7873 or visit www.everpure.com.